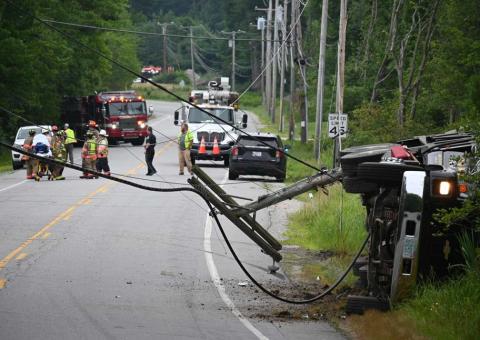 An overturned dump truck that brought down utility poles on Monday has prompted a safety warning from local emergency and utility officials after the driver faced some tense moments as he remained inside while live electrical wires were draped on and around the vehicle.

The driver wasn’t hurt in the accident that closed Epping Road for seven hours, but the wires created the potential for serious injury until they could be de-energized and removed.

“We made voice contact with the driver and advised him to not leave the vehicle until the power was secured. A person’s first instinct is to try to escape, but in a case like this it can be extremely dangerous,” Exeter Assistant Fire Chief Justin Pizon said.

Crews from Unitil arrived shortly after the accident and were able to de-energize the lines to make it safe for the driver to climb out of the passenger’s door and first responders to work around the scene.

While there were no injuries, officials say the accident should serve as a reminder about the dangers of energized lines and what to do if they come in contact with a vehicle.

“Monday’s accident could have had a very different outcome if steps weren’t taken to ensure the safety of the driver during the initial moments after the crash. People don’t often think about what they would do in a situation like this, but it’s something they need to be aware of to protect themselves and others,” said Alec O’Meara, media relations manager at Unitil.

Each incident comes with its own set of unique circumstances, but Pizon said it’s critical that occupants remain inside their vehicle until help arrives because the ground around the vehicle could be energized.

Not all energized wires will arc and smoke, but he said they’re still dangerous and could be deadly.

“It’s important to call 9-1-1 immediately and inform dispatchers that you’re still inside and that wires have fallen on the vehicle,” Pizon said.

If passersby notice the accident and begin to approach to offer assistance, those inside the vehicle should roll the window down and honk the horn to warn them to stay away because they could be injured by touching any equipment or the ground around the vehicle.

In the event of a fire, O’Meara said anyone inside should get out of the vehicle, but avoid touching the ground and vehicle at the same time. They should also remove any loose clothing and exit the vehicle by jumping out with feet together to prevent electricity from traveling through their body.

Once outside, O’Meara said it’s important to shuffle away from the vehicle by keeping both feet on the ground at all times or hopping like a rabbit with both feet together.

Exeter firefighters and police keep their distance while they wait for crews from Unitil to de-energize downed wires around a dump truck after it overturned on Epping Road in Exeter on Monday. (Photo provided by Exeter Fire Department)