Unitil Makes List of Best Companies to Work For in NH 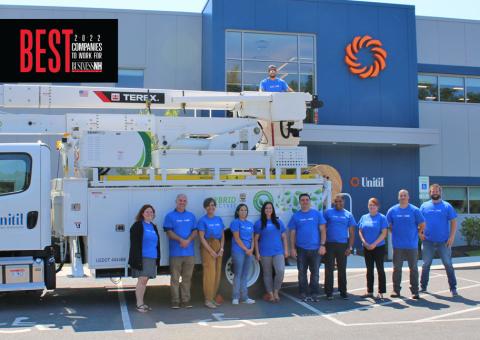 Unitil Corporation, (www.unitil.com), a provider of natural gas and electricity to customers throughout New England, is honored to be named one of Business NH Magazine’s “Best Companies to Work For.”

In its September issue, the magazine revealed its list of the Top 30 companies to work for in New Hampshire, describing them as employers who have gone “out of their way to create engaging workplaces and understand that fulfilled employees are more productive.”

“This year’s competition attracted a record number of applicants as companies seek to differentiate themselves in a tight labor market. The new workplace realities are evident among this year’s winning companies as flexibility is a consistent focus with many winners offering remote and hybrid work schedule options,” the magazine said in announcing its list.

This is the first time that Unitil has made the coveted list, which was determined following a review of applicants from across the state who were required to complete an employee engagement survey along with an extensive employer survey that highlighted benefits and workplace practices. Company culture responses on employer surveys were judged by a group of executives who work in human resources.

The results of Unitil’s own internal survey conducted each year has found that over 91 percent of employees say they’re proud to work for the company.

“Unitil is proud of its strong company culture,” said Alec O’Meara, Unitil’s media relations manager. “We’re pleased that Business NH Magazine has recognized the efforts we’ve made to create a work environment where company values are inherent in all of our workers.”

Of Unitil’s more than 500 employees, 393 work in New Hampshire at the company’s offices in Concord, Exeter, Hampton and Portsmouth.

In its profile of the company, the magazine highlighted Unitil’s creation of a Diversity, Equity and Inclusion Council earlier this year following the results of an annual employee survey. The council partnered with The Mars Hills Group to facilitate monthly meetings, newsletters, and company-wide educational events, Unitil has also been named a Diversity & Inclusion Employer Champion through a program at the University of New Hampshire that recognizes employers with a commitment to DEI.

Through the DEI Council, Unitil also discovered the need for an Employee Resource Group for women in engineering, which is now being launched.

The magazine noted that the average tenure of a Unitil employee is 12 years, which is eight years longer than the national average.

“One reason the company cites is its ability to listen to employees and evolve its culture in response,” the magazine said.

In addition to its DEI efforts, the magazine pointed to other aspects of Unitil’s work environment that benefit employees, including enhanced manager training and development to create the next generation of leaders; the issuance of company laptops and/or personal mobile devices to work from anywhere; technology for customer service managers to take customer calls from home during emergencies; eight hours of paid time off each year for employees to volunteer; employee reimbursements of up to $400 annually for fitness memberships, classes or equipment; $4,000 in adoption assistance; exceptional employee, length of service, and retirement awards that all come with a monetary award; and tuition reimbursement of $7,500 annually for undergraduate courses and $10,000 for graduate courses.

The 2022 winners will be celebrated at a “Breakfast with the Best” hosted by the magazine on Oct. 5.