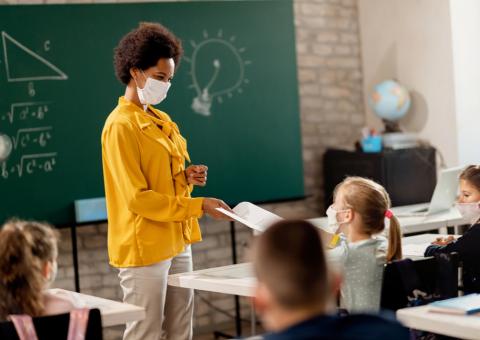 Unitil, (unitil.com), a provider of natural gas and electricity to New England customers, and the Portland Sea Dogs are partnering to recognize educators in Maine and New Hampshire with the Unitil Teacher of the Month Award. The award initiative, which honors one teacher a month from August 2021 through December 2021, is accepting nominations through the end of November.

The Unitil Teacher of the Month Award shines a spotlight on educators from all grade levels and disciplines who are improving student achievement, using innovative strategies in the classroom and making a difference in the lives of their students. Nominations for the remainder of 2021 are open until November 30th via an online nomination form.

Each month, the winning teacher receives:

Previous honorees include Mikayla Monaghan of Montello Elementary School (August) and Abby Snyder of Barbara Bush Children’s Hospital (September), who were nominated for inspiring a lifelong love of learning in their students and helping build a foundation for their long-term successes.

“The Teacher of the Month Award has been a fantastic initiative thus far,” Allison Casiles, Sea Dogs Director of Promotions said. “We’re looking forward to more Maine and New Hampshire residents nominating educators who have positively impacted students’ lives both inside and beyond the classroom.”

“Teachers play such a pivotal role in our communities. This was especially apparent during the challenges of remote and hybrid learning throughout the pandemic,” said Alec O’Meara, Media Relations Manager at Unitil. “We’re thrilled to be able to partner with the Portland Sea Dogs and show gratitude to our brightest educators and their contributions. It’s the least we can do to thank them for their tireless work.”

About the Portland Sea Dogs

The Portland Sea Dogs are the Double-A Northeast League affiliate of the Boston Red Sox. In 28 seasons the Sea Dogs have welcomed over 10 million fans to Hadlock Field in Portland, Maine. The Sea Dogs have been awarded two of Minor League Baseball’s most coveted awards, the John H. Johnson President’s Trophy, Minor League Baseball’s most prestigious award, and the Bob Freitas Award, which is presented by Baseball America for long-term success. The Sea Dogs’ “Strike Out Cancer in Kids” program has raised over five million dollars for the Maine Children’s Cancer Program. Over 300 Sea Dogs players have played in the Major Leagues including some of today’s Red Sox stars including Xander Bogaerts, Rafael Devers, and Christian Vazquez. For more information on the Sea Dogs visit seadogs.com. Follow the Sea Dogs on Facebook, Twitter, and Instagram.