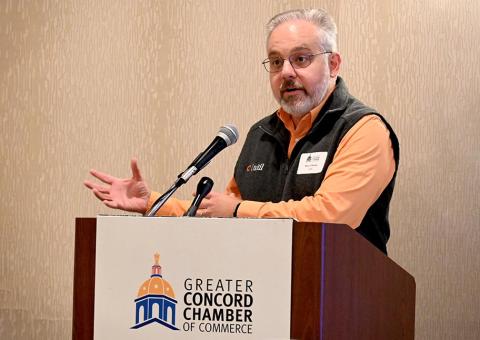 Unitil Corporation, (Unitil.com), a provider of natural gas and electricity to customers in New England, participated in the Greater Concord Chamber of Commerce’s monthly forum on the factors behind rising energy costs in the region, steps being taken to ease the impact, and how customers can prepare as the winter season approaches.

Unitil Media Relations Manager Alec O’Meara joined a panel of speakers at the event on Sept. 15 to explain how natural gas pipeline constraints are forcing New England to compete in the global market for Liquefied Natural Gas (LNG) shipments, resulting in higher than normal energy supply rates this winter.

“All New England states are a collective group when it comes to energy procurement and supply, and supply is really the key thing that is driving this increase,” he told the audience gathered at the Holiday Inn in Concord for the forum.

O’Meara spoke about the challenges of meeting the demand for natural gas during the winter months, offering an overview of how New England’s energy supply used to generate electricity has changed over the past two decades as efforts are made to move away from more emissions-based fuels to a mix of cleaner and more renewable energy sources.

To supplement the natural gas supply, especially during the winter, New England relies on ships to bring LNG from abroad into the region. On peak days in the winter, O’Meara said as much as 35% of New England’s natural gas supply comes in on those ships, but the energy crisis in Europe fueled by Russia’s invasion of Ukraine last February has led to costs that are much higher this year. The conflict has put New England in direct competition with Europe.

O’Meara broke down a typical utility bill to highlight the difference between supply and distribution rates. He explained that the distribution rate is the portion that covers a utility company’s cost of providing electricity.

“The distribution piece is effectively the utility piece. … It is the people, it is the buildings, it’s trucks, it’s poles, it’s the call center. It’s everything that you think of when you see your utility around you and it’s all the infrastructure that gets the energy from where it is to your home,” he said.

While the distribution rate remains fairly stable, the supply rate is the portion of the bill that sees the most volatility. Unitil, which doesn’t generate its own electricity, is required to go out to bid for the current market rate of electricity in New England every six months.

In an effort to partially mitigate the size of any rate increase this winter season, state regulatory agencies in Massachusetts and New Hampshire approved Unitil’s request to get bids on supply rates for an eight-month period rather than the traditional six-month period. That means Unitil’s winter rate, which the agencies have not yet approved, will be effective from Dec. 1 to July 31.

During last week’s forum, O’Meara also addressed proactive steps Unitil has taken to educate customers about the increasing energy costs and options available to them to prepare for this winter, including energy efficiency programs, assistance programs and third-party energy suppliers.

“We try to serve as an adviser to our customers,” he said. “We recognize that this is a really unique time in the energy industry.”

Third-party suppliers give customers an opportunity to effectively serve as their own broker by finding an energy supplier with a supply rate that would be included in their regular Unitil bill.

“Just like any other long contract you might sign, it’s very important to know exactly what you’re signing if you’re looking at (a third-party supplier). You want to know the length of that contract. You want to understand what happens when it expires, but it is an option and it’s something that may give you a different opportunity over the coming months,” O’Meara said.

More information on winter energy supply costs and resources available to customers can be found at Unitil.com.