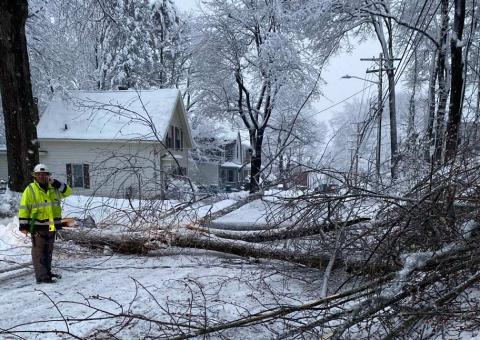 Unitil Corporation, Unitil.com, a provider of natural gas and electricity to customers in New England, continues to make progress as crews work to restore power following Monday’s snowstorm that resulted in damage to the electrical system from multiple rounds of heavy, wet snow.

A total of 29,257 customers have been impacted in all of the company’s service territories since the start of the storm. At its peak Monday night, Unitil had 10,454 customers with no power.

Damage assessment is ongoing to provide an accurate estimated time of restoration for affected customers. As those assessments are completed, estimated times of restoration (ETRs) are being added to the Unitil Outage Map. Unitil expects to have a better sense later today of the repair work that will be needed in the remaining impacted areas and when the majority of customers are expected to have their power restored.

“This storm system didn’t wrap up until last night, but our crews weren’t able to begin damage assessment until daylight to determine an accurate estimated time of restoration for our customers who were still without power today. Our crews have encountered multiple fallen trees, downed wires, and broken utility poles,” said Unitil Media Relations Manager Alec O’Meara. “We’re hopeful that as temperatures warm above freezing, combined with today’s sunshine, we’ll see more of the snow that’s been weighing down limbs for days begin to fall off and relieve the pressure.”

Monday's storm came in multiple waves and dropped significant amounts of heavy, wet snow onto already burdened tree limbs and power lines over the course of the day, resulting in new outages as previous ones were restored. The storm followed on the heels of another weather system on Friday that brought the first round of heavy, wet snow to parts of the region.

Unitil opened its System Emergency Operations Center at 6 a.m. today to coordinate its response and has brought in additional crews from Canada to assist with the restoration efforts.

The latest forecast shows the potential for another round of heavy, wet snow possibly hitting the region Wednesday night, which could impact any ongoing restoration efforts.

“Depending on how this next storm unfolds, we could see additional outages, and possibly in areas where repairs were already made following Monday’s storm,” O’Meara said. “Any new hazardous conditions during the next storm, such as difficult travel or gusty winds, could also hamper restoration efforts. Safety is a top priority for our crews, as well as our customers. It’s important to remember that bucket trucks are unable to extend arms for safety reasons in high wind above 35 mph, which can further slow response times.”

Heavy wet snow has the potential to damage trees and to take wires to the ground. We urge all to always assume all cables and wires have fallen or dangling are energized and stay away. Be sure to avoid wet ground or puddles near a downed line, as water conducts electricity. In addition, keep away from all flooded and debris laden areas because they may be hiding downed lines. Stay in a safe place and avoid driving in damaged areas so you don’t interfere with rescue and restoration efforts.

Unitil will be communicating throughout the event through Public Service Announcements (PSAs), our website, our customer call center and through the media. We also encourage customers to follow along with our storm updates via Facebook, our Twitter feed (@Unitil) and we will be providing real-time outage information online at unitil.com/map.

Unitil asks that when reporting outage information, outlets time stamp the information. Outage numbers change hourly and we wish to make sure the information customers receive is consistent and understandable. Re-Tweets and re-posting of old information without referencing a time can create confusion.

Customers experiencing outages should call 1-888-301-7700 or report online at unitil.com/report-outage.