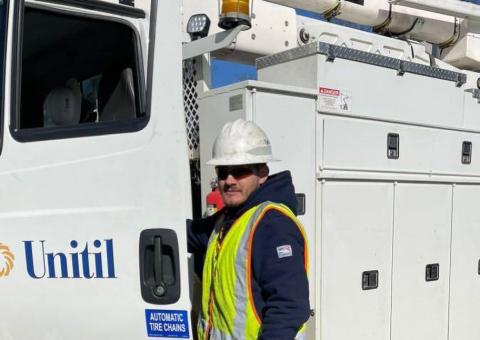 Unitil Corporation, (Unitil.com), a provider of natural gas and electricity to customers in New England, is celebrating National Lineworker Appreciation Day by recognizing the many men and women who have dedicated their careers to keeping the lights on. This special day set aside to honor lineworkers and their commitment to the profession will be held today, April 18.

“It’s easy to take electricity for granted, but when an outage occurs and the lights go out, we immediately feel the impact and minutes can seem like hours. Lineworkers are essential to keeping our homes, businesses and infrastructure powered up. We hope everyone will take a moment to think about the critical role lineworkers play and appreciate the efforts they make in all kinds of weather,” said Unitil Media Relations Manager Alec O’Meara.

Unitil lineworkers in its electrical service territories in Massachusetts and New Hampshire include employees like Ryan Hildreth, who joined Unitil just over four years ago, and Nigal “Joe” Chapman, a lead lineman who’s spent 30 years with the company.

Now 62, Chapman knew he wanted to be a lineworker when he was just 10 years old. As a child, he was awestruck by the bucket truck with the boom and the mechanics behind it.

The career choice proved to be everything he thought it would be and more. While it has its challenges, Chapman said the job has come with many rewards.

“To me, it’s rewarding to know that you accomplished something. Not everything is going to be easy. There are going to be some difficult things that are going to require some challenging logistics, but the rewarding part is that when you put somebody else’s lights on, you made a difference in their life. They feel comfortable and they feel safe when the lights come on,” he said.

Electrical linework wasn’t the career path Hildreth originally chose after spending four years in the Marines, but the 33 year old was encouraged to explore the profession by a friend.

After working alongside some lineworkers while employed by a tree service company, Hildreth’s interest in linework began to grow. He eventually decided to give it a shot, using the educational assistance provided to servicemembers and veterans through the G.I. Bill to pay for his training at the Southeast Lineman Training Center in Georgia.

Hildreth’s work has taken him into the aftermath of storms near and far. Last August, he joined a Unitil crew in Louisiana to assist with power restoration in the wake of Hurricane Ida - one of the strongest storms to strike the U.S Gulf Coast.

The immense devastation had an impact on Hildreth. “I felt bad for the people down there. It was brutal. I had never seen anything like it. The locals said it was worse than Katrina. You could drive for an hour straight on a main road and every single pole was broken. Houses were destroyed. The devastation was unreal,” he recalled.

Despite the unimaginable conditions, Hildreth still remembers the warmth he felt and the positive attitude exhibited by the people he met during the massive power restoration effort.

“You’d pull up to a street and you’d be assessing the damage and trying to do what you can do. Their roof would be in their neighbor’s yard and they were like, ‘Do you guys need any water? You want us to make you some food? Is there anything we can get you?’ They were so cool about it,” he said.

While Connecticut is the farthest he’s traveled during his 30 years with Unitil, Chapman has worked plenty of storms and knows how tough it can be.

“Every storm is different. Sometimes we can get our stuff cleaned up in a day, but when the ice storm came it took us quite a while, and you have to take care of your family at the same time. You’re trying to balance different things,” he said. “It’s good to see how everybody comes together to accomplish the goal to get the lights back on. Everybody has the mindset, ‘We’re going to do it. We’re going to make it happen.”

Like others, Chapman’s family has understood that the sometimes unpredictable schedule comes with the territory.

But as difficult as it may be on the homefront, Hildreth said, “The most rewarding part is, I’m Superman to my kids. They come running out when I pull in the driveway. They’re so happy to see me and I’m so happy to see them. That’s the best part.”